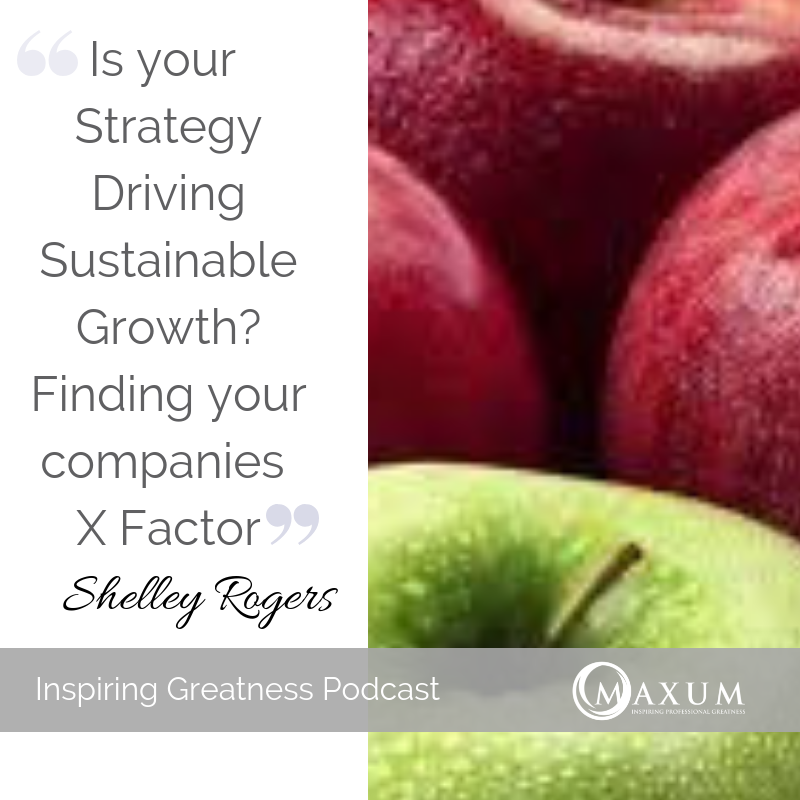 Episode 175 Is your firms Strategy driving sustainable growth? – The X Factor to help you become 10 times better than your competition!

Welcome to part four on Strategy, if you are a new listener welcome to Inspiring Greatness where we interview amazing guest or share business tips on how to help you grow your business and increase profits.  If you have not listened to our series yet you should start at episode 171 first.    Part 1 was Simon Sinek’s golden circle understanding your WHY and core purpose. Part two identifying was operational activities can you do 3 to 5 activities that set you apart from the competition – These are process that your company uses to deliver your products or services.  What makes your company different?  Part 3 is all about how your company can surpass the competition! We highlight the difference between a SWOT & SWT analysis (Strengths, weakness, opportunities and Threats vs. Strengths, Weaknesses and Trends. Episode 174 we covered a strategy called Profit per X and today is on the X Factor to help you become 7 – 10 times better than your competition.  I refer to this as the secret sauce.

We have FREE worksheets on our show notes page for you to download.  If you are stuck on your strategy, I would be happy to help. You can book in a free 30-minute call with Shelley Rogers.

As mentioned discovering your X Factor can provide a ten times advantage over your competitor. Discover Your X Factor.

The X Factor concept is as old as John D Rockefeller. If you have not ready read the book called Mastering the Rockafeller Habits by Vern Harnish, I highly recommend it.  We will have links to it on our show notes page.   Many people find Rockefeller to have been ruthless in his business practices.  Discovering his X Factor was an innovative that allowed Rockefeller to control the oil industry.  As described in Verne Harnish’s Mastering the Rockefeller Habits, the key to winning in the oil business at that time was gaining an advantage in transportation costs.  Rockefeller was heavily invested in railroads because of this.  His decision to vertically integrate by producing his own oak barrels, rather than using green timber like his competitors. Having the oak sawed in the woods, then kiln dried, reduced the weight and sliced Rockefeller’s transportation costs in half. This produced a 10x advantage over his oil competitors.

To discover your X Factor ask questions like: “What is the largest cost component in my industry?” or “What is the part of my industry that I hate the most?” Go to your industry trade association tradeshows – look at the breakout session topics over the last several years and look for patterns. These are “top of mind” problems for your industry, and all of your competitors are faced with the same challenges. Next begin looking for solutions that will give you an exponential competitive advantage (7-10x) for your industry. Once you figure it out, don’t tell anyone.

Here is an example of how an X-Factor revolutionized not only a company, but an industry many thought was fragmented and stale. Vistaprint set out in the mid-2000s to test their belief that marketing and printing offerings could be provided to small businesses in a profitable manner; to an established industry that believed that small business printing services were not scalable.

Vistaprint challenged this industry belief and developed printing technology that enabled it to aggregate and print customers’ small orders in a highly scalable way. As a result of this technological innovation, Vistaprint developed an X-Factor that turned the industry on its head and enabled the company to grow from $5 million to $25 million in revenue over a 5-year period, servicing nearly 10 million clients each year in over 120 countries.”

“Let’s look at another X-Factor story, this time from a small business: Happy Lawns, which was owned by Barrett Ersek. In 2001, Barrett was frustrated. His lawn care business had flat lined at $2M for 3 years in a row. He tried everything to drive sales, but nothing seemed to work. Something in the sales process was broken. It cost $300 and 3-4 weeks to acquire a customer that would spend $400 annually with Barrett’s company; and since the company’s gross profit was around 50%, it took 6 quarters (18 months) to cover the acquisition costs.
While Barrett was struggling, he learned about the X-Factor and got to thinking about how to gain a significant advantage over the competition. Barrett decided that instead of focusing on the problem, he would focus on the asking the right question. He asked: How can I make the sales cycle cheaper and faster by 7-10x? He started asking everyone he knew and he finally found it.

Since Barrett sold his company and now does public speaking about his story, we can share his X-Factor. In 2003, at a ‘Birthing of Giants’ program Barrett was asking everyone he could find about his X-Factor question and bumped into a guy who mentioned aerial photography maps, which later became the basis of Google Earth. No one knew about them at the time. The aerial photos made it possible to measure lawn size and see significant landscaping issues (like swimming pools) any place in the country without having to send a representative to the property. The concept revolutionized Barrett’s sales process. He could now give a prospect an estimate right over the phone in 3 minutes when it used to take 3-4 weeks. When he heard about aerial maps, the answer to his X-Factor question, Barrett immediately, updated his business plan with his new process, he sold 1,000 lawns in 3 weeks. He got a patent on his process and his sales grew from $2M to $10M in just a few years.”

At the time (late 1980s), the average tenure for a store manager was 6 months. Better store managers improved the quality of the people that worked in the restaurant and that, in turn, helped keep the quality of the food and the customer experience high. In most chain restaurants, competent restaurant managers got promoted to area manager positions in order to make more money or they left to start their own restaurants. Big chains were spending millions to recruit/train new managers – so they realized if they could retain their store managers for more than the typical 6 months that they would have a competitive edge.
In 1988, Outback initiated a breakthrough compensation plan based on their prior experience in the industry. They asked key managers to sign a 5-year contract and to invest $25K in the restaurant they would manage in exchange for 10% of the store’s cash flow and a higher-than-industry average base salary. The deal could turn a $45K-per-year employee into a millionaire. Ultimately, the experiment worked tremendously. 95% of managers stayed with Outback for 5+ years, giving the company an 10 times advantage over its rivals and 80% of employees renewed their 5-year contacts. Outback is so confident of its restaurant managers’ tenure that they put managers’ names in gold leaf in each restaurant’s entry way.”

After discovering your X Factor immediately begin to work on finding the next one. Your competitors will eventually figure things out (once they know you are doing it, they’ll know it’s possible and they’ll keep working until they find the answer). People work differently when they know something can be done. Therefore, start working on your next X-Factor as soon as you can after you launch your last X-Factor. X-Factors take some time to find. Solutions to complex problems that have stumped your industry for years won’t appear with just one brainstorming session.

What trends will affect your business? Which will influence your business positively and which could possibly hinder your growth? Can you state your business strategy in one simple sentence? If you answered no, I suggest you book time this week with your team to work on your business strategy. Get your free worksheet on the X Factor to help you become 7 – 10 times better than your competition. If you are stuck, I would be happy to help. You can book in a free 30 minute call with Shelley Rogers. 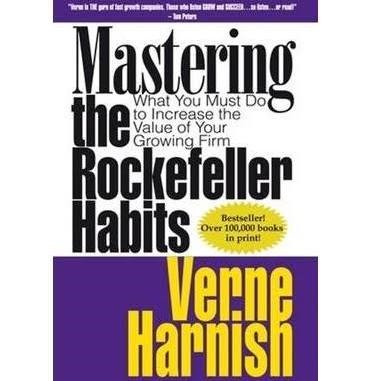 What are the underlying handful of fundamentals that haven’t changed for over a hundred years? From Harnish’s famous “One-Page Strategic Plan” to his concise outline of eight practical actions you can take to strengthen your culture, this book is a compilation of best practices adapted from some of the best-run firms on the planet. Included is an instructive chapter co-authored by Rich Russakoff, revealing winning tactics to get banks to finance your business

“Strategy execution is all about realizing the full potential of your strategy and not limiting yourself to only 50, 60 or 70 percent” 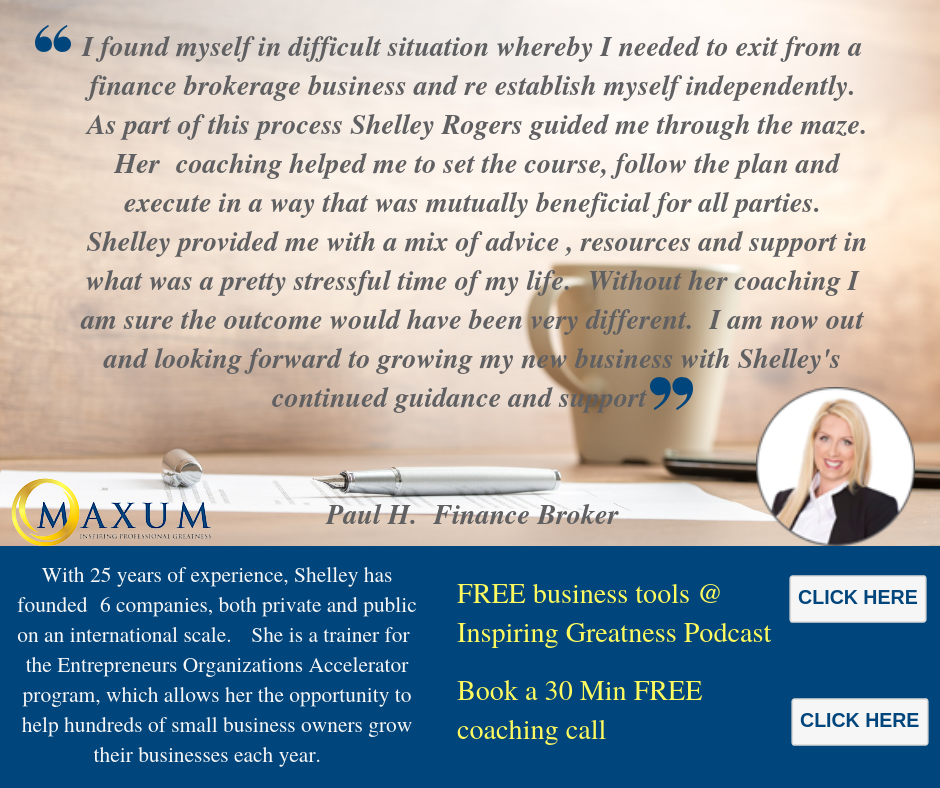