Self-taught software developer and businessman, Jeff Gale graduated from Columbia University with a Bachelor of Drama, Theatre and Arts comladay.Co-founding “Nylon Designs” in Brooklyn, he went on to create the successful “Ticket Biscuit”, one of the worlds smartest and most user friendly ticketing program.

Ticket biscuit continued to grow and expanded with the launching of mobile interfaces, IOS apps, cloud based technology and other remarkable progressions. A quiet nod toward his drama and theatre degree was also subtly recognised with “ticket biscuit” launching a program specifically for dance studios. The software is expected to double in size come 2016 in Canada and the US.

Gale has gone on to win the Alabama Technology Competition of the year, as well as becoming the recipient of the Inc. 5000 fastest growing private companies in the US in 2010 and 2015.To top it off, Ticket Biscuit was also awarded with the “Best Place to Work” award in 2013 and 2015 respectively. 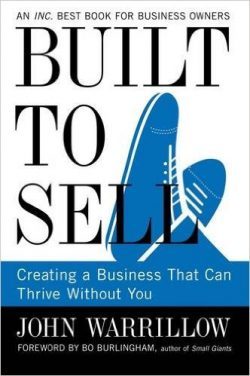 Built to Sell, Creating a business that can survive without you, by John Warrillow

Most business owners started their company because they wanted more freedom—to work on their own schedules, make the kind of money they deserve, and eventually retire on the fruits of their labor. Entrepreneurs can take specific steps—no matter what stage a business is in—to create a valuable, sellable company. Warrillow shows exactly what it takes to create a solid business that can thrive long into the future.