155 The key to overcoming anything 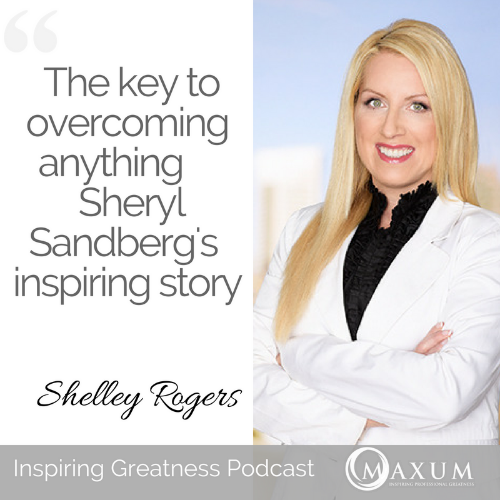 155 The key to overcoming anything

Last week I interviewed Jellaine Dee from Luxx Divine on episode 154.  In the interview she spoke passionately about as leaders what’s most important is to know yourself.  Know what you want, what do you want to create.  Stop doing what everyone else expects of you.  When you truly know yourself what you are good at you can overcome anything.

Today’s episode we will share a story from Sheryl Sandberg as her message magnified the message from Jellaine on hope, adversity & resilience.

It is in our darkest times that we find our greatest strength. Yesterday, one year on from the worst day of her life, Sheryl Sandberg, billionaire COO of Facebook, shared publicly for the first time how she faced adversity, and how you can to.

At an emotional commencement speech at UC Berkeley, Sheryl had this advice: “When tragedy or disappointment strike, know that you have the ability to get through absolutely anything. I promise you do. As the saying goes, we are more vulnerable than we ever thought, but we are stronger than we ever imagined.”

A year ago, while she was on top of the world with the growth of Facebook, where she is No.2 next to Mark Zuckerberg, her 47 year old husband and CEO of SurveyMonkey, Dave Goldberg, suddenly died of a heart attack while exercising in a gym. Sheryl said “We were at a friend’s ﬁftieth birthday party in Mexico. I took a nap. Dave went to work out. What followed was the unthinkable—walking into a gym to ﬁnd him lying on the ﬂoor. Flying home to tell my children that their father was gone. Watching his casket being lowered into the ground.” “Dave’s death changed me in very profound ways. I learned about the depths of sadness and the brutality of loss.” “But I also learned that when life sucks you under, you can kick against the bottom, break the surface, and breathe again. I learned that in the face of the void - or in the face of any challenge - you can choose joy and meaning.

I hope you enjoyed this episode and it inspired you that you can do anything if you have resilience.  If you enjoyed this topic you can hear more on episode 005 & 006 one of my first interviews with Tina Tower and a golden nugget Friday episode 006 titled The key to success is resilience & perseverance.