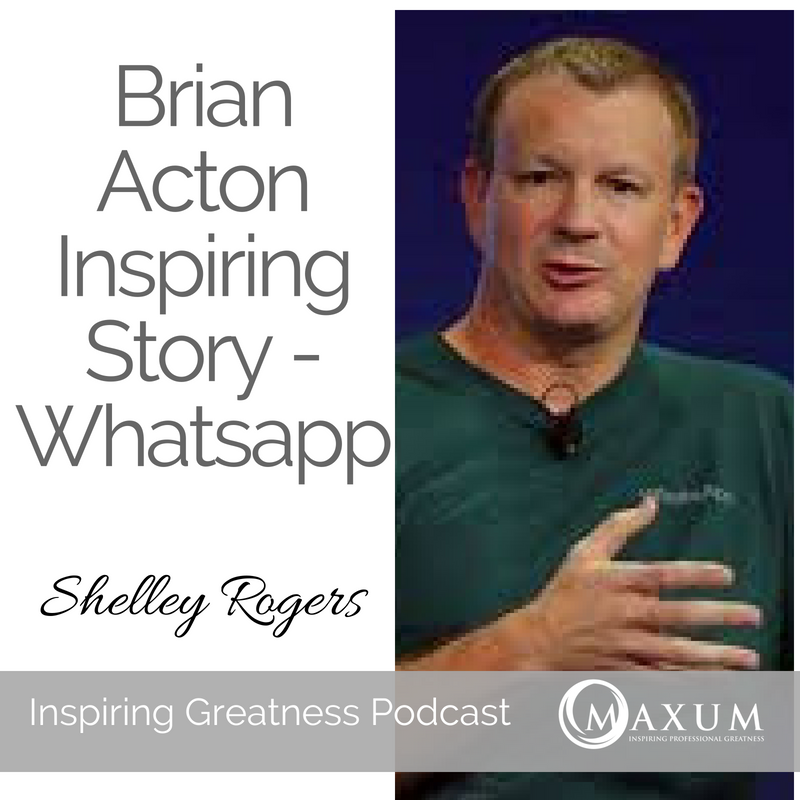 Last week’s episode was about are we born with entrepreneurial genes or do we learn the traits? What’s the difference between Employees and entrepreneurs.

Have you ever been rejected or fired from a job?  I was fired from my very 1st job cleaning a auto-body shop for my Brothers friend Scott.  I will quickly share the story with you.

On to Brian Acton story. After 11 years at Yahoo! and out of a job at 38 years old, Brian went job hunting... first to Twitter (rejected) then to Facebook (rejected).

What do you do when you’re 38 years old, competing unsuccessfully against 20-somethings for a job as a systems engineer? If you’re Brian, you go out and play frisbee...

Two years earlier, he had traveled South America playing ultimate frisbee with Jan Koum, who he had met while working at Ernst & Young as a security tester. Now, in the midst of his job rejections, he met up with Jan again for a game of frisbee.

It was while playing, Jan told Brian he was working on a start-up to create a new kind of mobile app, but he had run out of money. Jan had lived on welfare with his parents when he first arrived to the US from Ukraine. Not wanting to go back on food stamps, he asked Brian for advice on whether he should quit and start looking for a job.

Admiring Jan for his courage in starting his own company, Brian replied “You’d be an idiot to quit now. Give it a few more months.”

The topic turned to Brian’s success in getting a new job (which was nonexistent) and it was only a matter of time before Jan (who had previously been rejected from a job at Facebook) had turned Brian’s advice on himself.

He persuaded Brian to quit the job hunt and join him on his start-up, creating a new messaging app, “WhatsApp”.

Brian and Jan had one thing in common - Ultimate Frisbee. Other than that, they turned out to be complimentary to each other in every other way. As Brian says, they are “Yin and Yang, I’m the naive optimist, he’s more paranoid. I pay attention to bills and taxes, he pays attention to our product. He’s CEO. I just make sure stuff gets done.”

In a job hunt, all your weaknesses are exposed. In a start-up, your weakness can be supported by your team member’s strength. So becoming an entrepreneur is easier than being an employee.

It took a few months of convincing but Brian finally decided to take the step, reject the rejecters, and join Jan.

Brian managed to raise some funds to keep the two going, while they worked out of the Red Rock Cafe in Mountain View. With no office and no overheads, they put 100% focus at growing WhatsApp as the messaging app with “No Ads. No Games. No Gimmicks.”

In the first year, revenue grew to only $5,000 a month, but user growth boomed. Brian and Jan would switch from “free” to “paid” for the app (charging $1) when users began growing too much. When they saw people would even pay for the app, Brian said “You know, I think we can actually stay paid.”

The company stayed on an exponential growth path and, four years later, Facebook - the company that had rejected both founders - bought WhatsApp for $19 billion, making both Brian and Jan multi-billionaires.

As a symbolic gesture to their difficult beginnings, the two signed the purchase papers on the steps of the building where Jan’s parents would pick up their food stamps.

And Brian remembers a second thing outside of Frisbee that the two have in common, and which led to their success: “We’re part of the Facebook reject club.”

It took 4 years from ultimate frisbee and ultimate rejection to Brian and Jan’s $19 billion success.

Where you are in 2020 will have everything to do with the decisions you make today.

> Are you focused at finding a job instead of adding value to those already around you?

> Are you chasing opportunities instead of seeing the ones that are right in front of you?

> Is your latest rejection hiding a doorway behind it? A doorway to an entirely new, more exciting adventure?

Sometimes, it just takes a change in focus. “Sometimes the best gain is to lose.” ~ George Herber